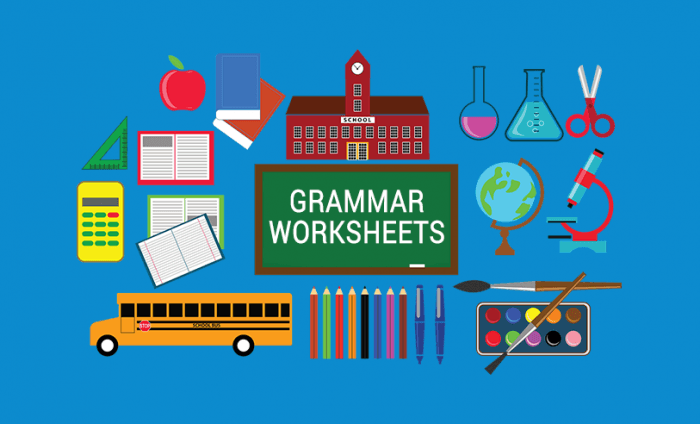 These free 25 grammar worksheets allow you to safely conduct your classes without the hassle of creating your own.

They are free to use without any need to ask permission. And they cover tons of grammar topics like nouns, verbs, prepositions, adjectives, and adverbs. 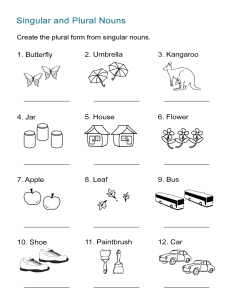 In this singular and plural nouns worksheet, students have to make the plural form from singular nouns. For example, the plural of “balloon” is “balloons”. When there’s more than one, in this case, they add -s. Simple as that. 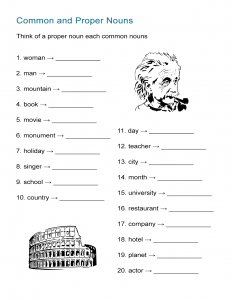 In this common and proper nouns worksheet, students have to brainstorm types of proper nouns. For example, if the common noun is a mountain, they have to think of a proper noun like Mount Everest. 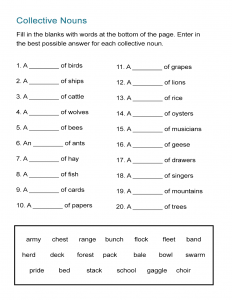 In this collective nouns worksheet, students have to fill in the blanks with words at bottom of the page. For example, words like “flock”, “herd” and “swarm” are collective nouns because they are names for a collection of things. In this case, “flock” is best suited with “birds” to make a “flock of birds”. 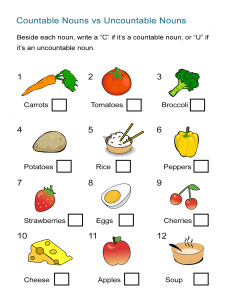 In this plural nouns worksheet, we test students’ knowledge of countables and uncountables. For example, we can specify a count for countable nouns such as 5 carrots. But for uncountable nouns, we can’t assign a number like rice. 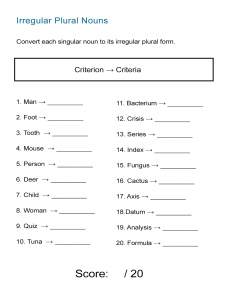 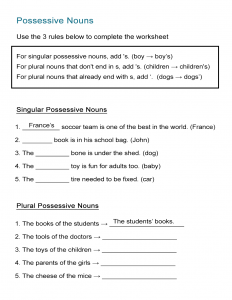 Possessive nouns show ownership. For example, “the boy’s ball” shows that the ball belongs to the boy. In this grammar worksheet, can you create the possessive form? 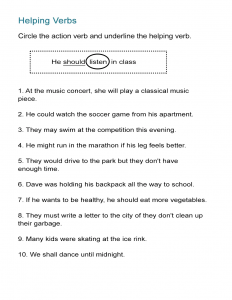 In this helping verbs worksheet, students have to read each sentence carefully. Next, they have to circle the action verb and underline the helping verb. 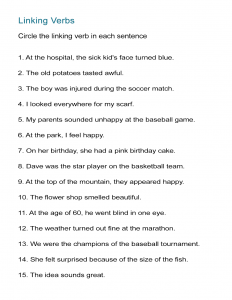 Linking verbs do not show actions. Instead, they link a subject to a noun or adjective in a sentence. In this linking verbs worksheet, students have carefully read all 15 sentences and circle the linking verbs. 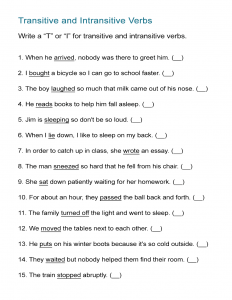 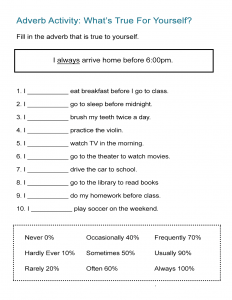 Adverbs of frequency express “how often” something takes place or the occurrence that an event happens. In this adverb worksheet, you have to fill in the adverb of frequency that is true to yourself. For example, I always eat breakfast before I go to class. 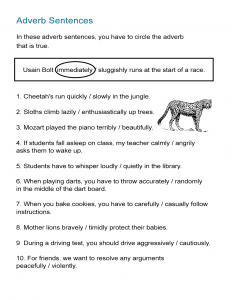 Can you identify the correct adverb to use in the sentence? For example: During the 100-meter sprint, Usain Bolt immediately / sluggishly dashes from the starting line. 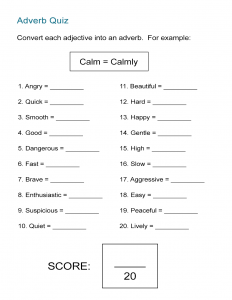 This adverb quiz tests student’s ability to convert adjectives to adverbs. For example, you can take the adjective “calm” and make it an adverb by adding “-ly”. 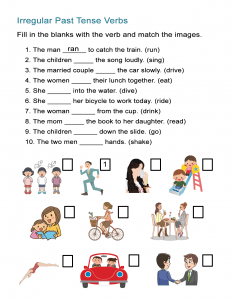 First, students have to complete the sentence by conjugating the verb in the irregular past tense verbs worksheet. At the end of each sentence, it has the verb they have to use. After completing this, they have to match each sentence with the image below. 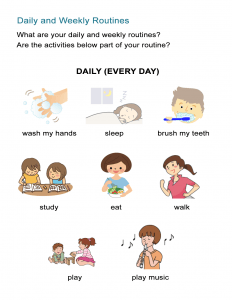 First, put students in pairs. Next, they review each of the daily routine examples in the worksheet. Using the present verb tense, they ask each other what their daily routines are? For example, do they wash their hands every day? Can they think of other daily routines they have? 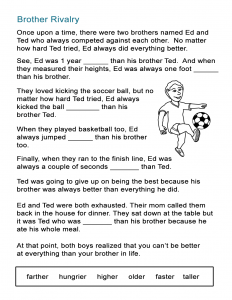 In this comparatives adjectives story, students have to fill in the blanks with the words at the bottom of the story. Which comparative adjective should go into each blank? After students finish the story, they can practice reading it aloud. 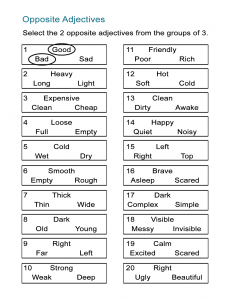 In this opposite for kids worksheet, students have to find the 2 opposites in each group of 3. After they find the opposites, they have to circle them. 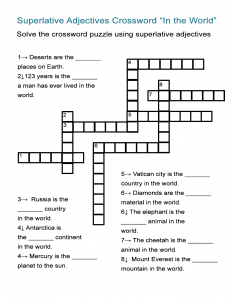 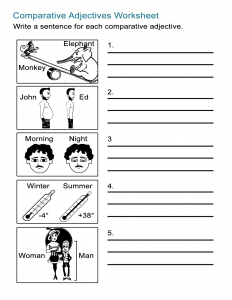 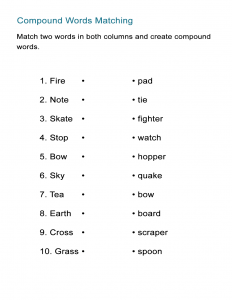 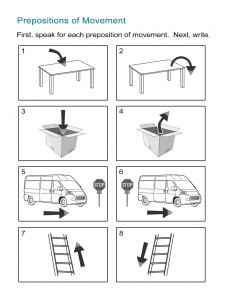 In this Prepositions of Movement Worksheet, students can practice the various ways how prepositions connect with the movement of objects. For example, we use words like onto, out of, into, toward, off, over, up, and down. These are prepositions of movement because they express the flow and direction for each preposition. 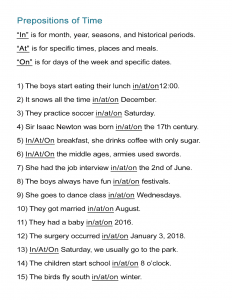 We use prepositions of time (in, at, and on) for the various aspects of time. But when do you use “in”, “at” and “on”? In general, we use “in” before for month, year, seasons, and historical periods. In English, “at” is for specific times, places, and meals. And we use “on” for days of the week and specific dates. 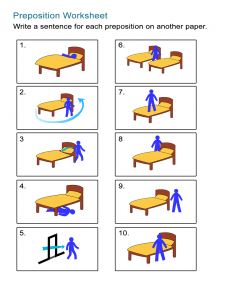 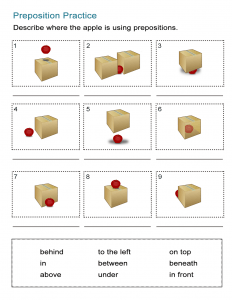 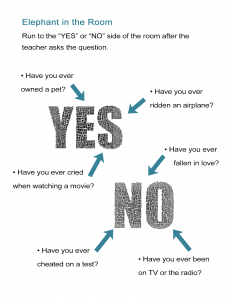 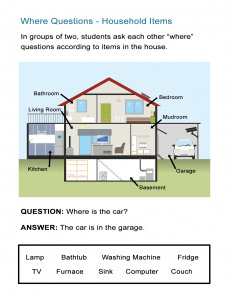 In groups of two, students have to go back and forth asking each other “where” questions. According to household items, they have to identify where the items are located. For example, where is the car? The car is in the garage.